Why Autism Speaks Does Not Speak for Us

Autism Speaks and the organizations that merged into it, including the National Alliance for Autism Research, have provided many grants to fund genetic studies and other autism-related research. In 2005, grant recipient Dr. Joseph Buxbaum predicted a prenatal test within 10 years.[1] Autism Speaks' co-founder Suzanne Wright made the organization's eugenic aims equally plain, to "eradicate autism for the sake of future generations."[2] There is a page on Autism Speaks' website supporting the efforts of James Watson and others "to identify autism susceptibility genes."[3] Watson resigned in disgrace from his position as the Chancellor of Cold Spring Harbor Laboratory after making grossly racist remarks,[4] and he has long advocated genetically enhancing children and eugenically exterminating people with cognitive disabilities, which he characterizes as "curing stupidity."[5]

Autism Speaks created a video in 2006 entitled Autism Every Day, which the producer admitted was staged to show negative images.[6] In one horrific scene, a mother described her thoughts of murdering her autistic daughter while the child was actually in the room.[7] Soon afterward, two board members of Autism Speaks said in a magazine interview that they sometimes hoped their autistic son would drown in their backyard pond.[8] Television ads by Autism Speaks have compared the odds of a child being autistic to the odds of a child being struck by lightning, [9] or killed in a car wreck, implying none too subtly that a child might as well be dead as autistic.

Two prominent figures at Autism Speaks, communications executive Alison Tepper Singer [10] and scientific advisor Dr. Eric London,[11] resigned in 2009 because they objected to the organization's complicity in perpetuating the groundless urban legend about vaccines and autism, which has led to reduced vaccination rates and tragic deaths of young children from vaccine-preventable diseases.[12] Dr. London warned bluntly in his resignation letter that "[i]f Autism Speaks' misguided stance continues, there will be more deaths…"[13]

Although Autism Speaks claims to speak for autistic people, it does not have—and never has had—even one autistic person on its board of directors or in its leadership. This is far out of line with the mainstream of the disability community, where individuals with disabilities work side by side with family members, professionals, and others to achieve quality of life and equality of opportunity. Autism Speaks' exclusionary attitude toward people with disabilities is clearly shown in a recent video entitled Neighbors,[14] which suggests that autistic children will have no friends unless they are taught to suppress their autistic mannerisms by means of behavioral therapy. The underlying message is that people with disabilities cannot be accepted as they are.

Thank you for such a well-researched article.

Thanks for communicating so well; this is not a disease to be cured but a diversity to be understood.

I'M NOT SiCK! I am not a DISEASE. I DON'T need to be FIXED. I don't need to CHANGE. Or LEARN how to be NORMAL. Why do you support someone whose brain is different because of something stupid they did to themselves, but don't support those who were just born that way? I am not a terrorist, I am not insane. I am not a victim.

I DO NOT NEED TO BE ERADICATED!


I am alive. Don't take that away because I was born with a different way of thinking.

Why are my parents trying to kill me?

AS was started by a man whose grandson had autism. Why do you have a problem with finding the genetics behind autism? Just because people with autism are perfectly capeable individuals, doesn't mean they would prefer to have autism. Much of my work has been with extremely "low-functioning" individuals on the spectrum and those horror stories are very true. Also, I would like to know why in the world you use the term "autistic" when your goals are so geared towards stopping the "dehuminization" of people on the spectrum? No corporation is perfect, AS isn't about what some of their researchers say or think- it's about the actual outcomes of research. Early diagnosis= early intervention= better outcomes for kiddos. While you can speak for people on the spectrum, I feel that it is unfair for you to take a voice for parents and non-spectrum advocates, since you have not walked in their shoes. No one is trying to "eradicate" people with autism. They are trying to prevent autism- and I have no idea why that would be a bad thing.

Furthermore, the two citations you gave to the resignation of those execs does not show any evidence that AS supports the idea that vaccines cause autism. They are merely conducting more research on the subject as scientists. Those two individuals leaving the organization for that reason alone is mind-boggling to me. AS has two branches- advocacy and research. I would say the research side is much larger. Doing more vaccine research is not the same as telling parents that vaccines cause autism. Most parents are not even wise to research- so someone else is feeding them these theories by saying "AS believes this and that." They are doing science-if people don't like that, they do not have to donate to AS. Leading a full-on anti-AS movement is pointless and absurd.

I realize that the above two comments are from 2013, but I feel I need to respond to anon here:

Believe it or not, autism is not intrinsically a bad thing. It does not make a person smarter or dumber than anyone else; it simply means they are different. They experience the world in a way that allistics cannot possibly fathom. So many great thinkers have been autistic-- regarded as geniuses simply because they have thoughts so utterly different from "normal" people's and were able to express their complex or profound ideas. Autistic people have trouble communicating their thoughts to others quite often (it's a bit like trying to describe a word in another language that has no equivalent in English). Autism is not a disease, or a disability, or an evil monster that possesses good, neurotypical kids. It is simply a different kind of mind. Eliminating that from the species has no benefit, and only serves to prevent people like Nikola Tesla or Albert Einstein from being born. Not only that, but trying to prevent autistic babies being born is about as moral as trying to prevent black babies being born. It only reflects the NT society's desire to just not deal with us. Being autistic wouldn't be nearly as much of a problem if society accepted autistic people as humans. Just because you know some people who would rather be NT doesn't mean that all of us feel that way. I think the majority of us don't. 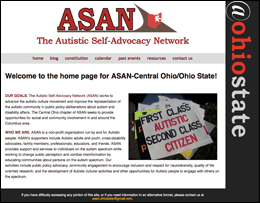 Visit our web site at http://asan.org.ohio-state.edu.

Other Blogs in the Disability Community